Birds can't see glass. What they see is the world reflected at them and it lures them in and kills them. It's up to us to make it safer.

It's up to us humans to make this safer for birds. Birds are in decline because of us and they need our help.

Birds cannot see glass. What they see is the sky and green space behind them reflected in the window. It looks like safe space to fly and unfortunately, with the speed most birds hit windows, the majority won't survive the impact.

Why Do Birds Hit Windows?

Birds cannot perceive most glass as a barrier, and often strike glass windows that reflect the sky or nearby greenery. Most birds migrate at night using the stars to navigate, and are drawn to city lights in urban areas along their migratory flyways. Birds are especially confused by light pollution on foggy or stormy nights, when the outline of the city and the source of the lights are less visible.

This confusion leads birds to land in the city, collide with buildings, and in some extreme cases, die of exhaustion. When downed birds reorient themselves and take flight in the morning, they often aim for a reflection and strike a window.

There are simple things that we can do.

1. UV decals - these are decals that have a special UV coating that reflects a special light back to the birds that only they can see. The downer to decals is that the sun does degrade these over time and need replacing as early as 3-4 months after application depending on the strength of sun on the particular window being dressed with them. Also you need more of them than the packaging says - but its a good economical place to start if you've had only a few bird strikes and know where the birds have specifically hit. We also have a window dabber, much like a bingo dabber that has the same UV component as the UV stickers that you can use to fill in the spaces between the stickers.

2. Opaque black decals - these are decals that are solid black and alert the birds to something physical and birds avoid them. They don't degrade over time, but the downer here is that humans can't see through them and they impede your view to the outside. You also need more of them than you think like above.

3. The gold standard, in my opinion, going forward are the "Feather Friendly" dot matrix grid system. (here) This is a tape that is applied horizontally across your windows every 2" vertically. It creates a visual barrier that birds can see and alerts them to avoid the physical barrier in front of them. It's been proven through scientific experiments that anything more than 2 square inches of space will look like fly-throughable space to a bird. This product eliminates that issue. Some people are concerned that the dots on the window will look too busy and it can initially. But, the fantastic thing about our brains is that the plasticity of it, allows our brains to filter out the dots like white noise and after a short time you won't see them, as you'll look past them and out to your green space. This product in my mind is brilliant at its job. It's a one and done application that doesn't degrade and can be scraped off the window if at any time you felt it was necessary.

Applying the Feather Friendly Dots. This is the stage of removing the tape. Pics are slightly out of order but you'll get the idea. 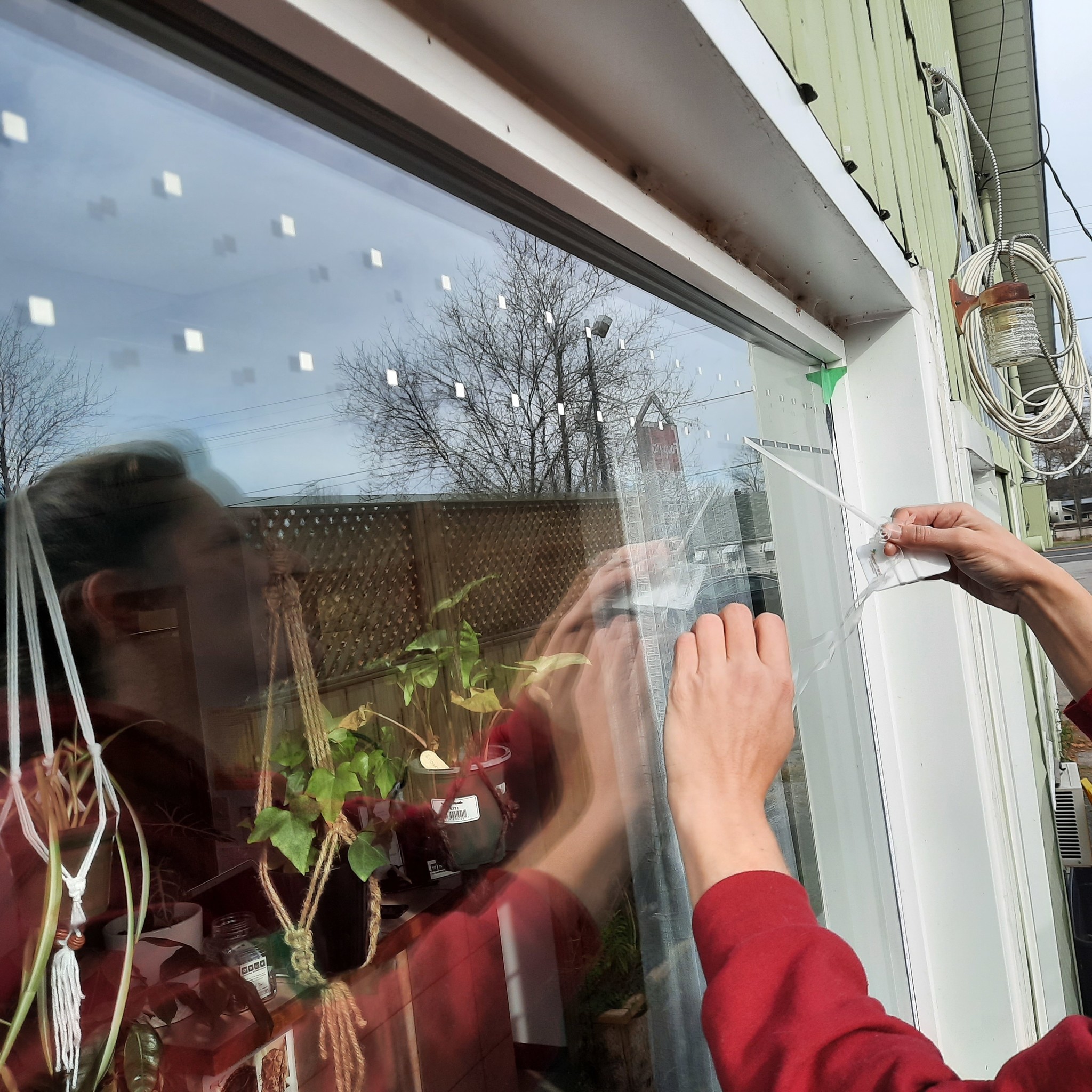 Without the dots, you can imagine how the reflection in the picture below would tease birds into believing it was fly throughable space. 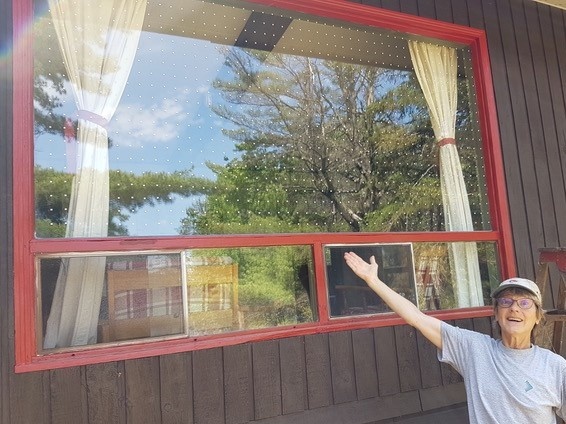 The finished product...You can see the dots, but I promise...you notice them less and less as you view through to greenspace beyond. 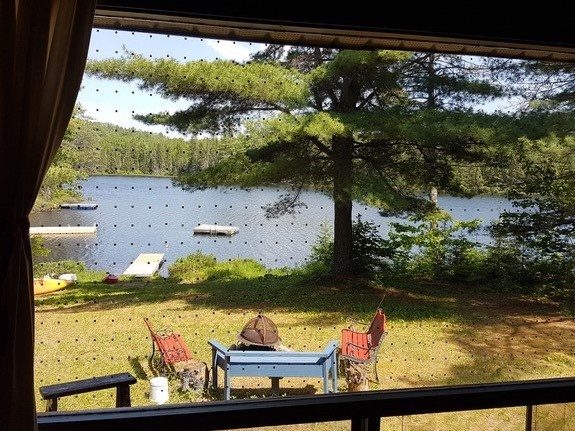 Here you can see the tape being applied. After scraping to apply pressure to the dots under the tape, the tape gets removed to leave behind the dots. 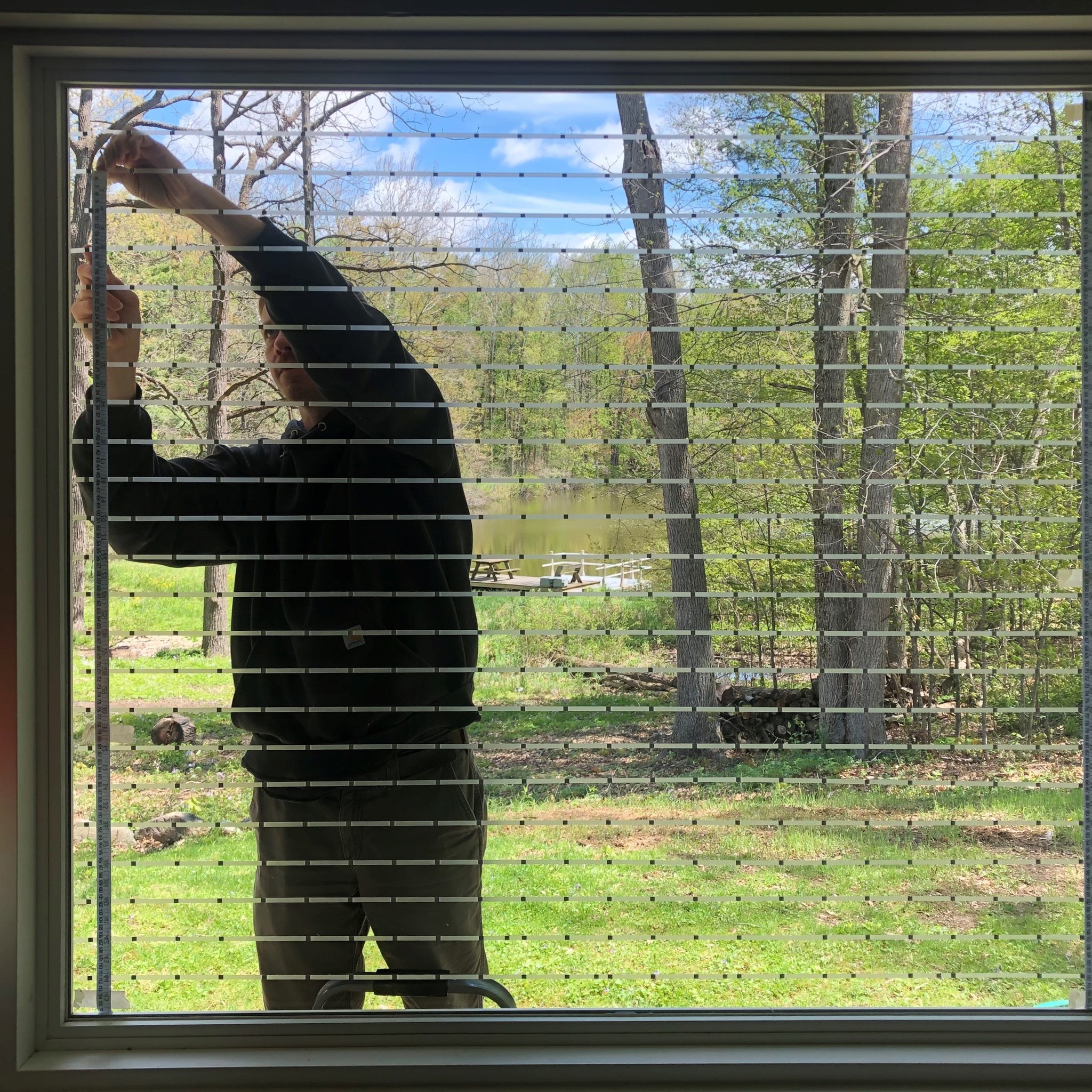 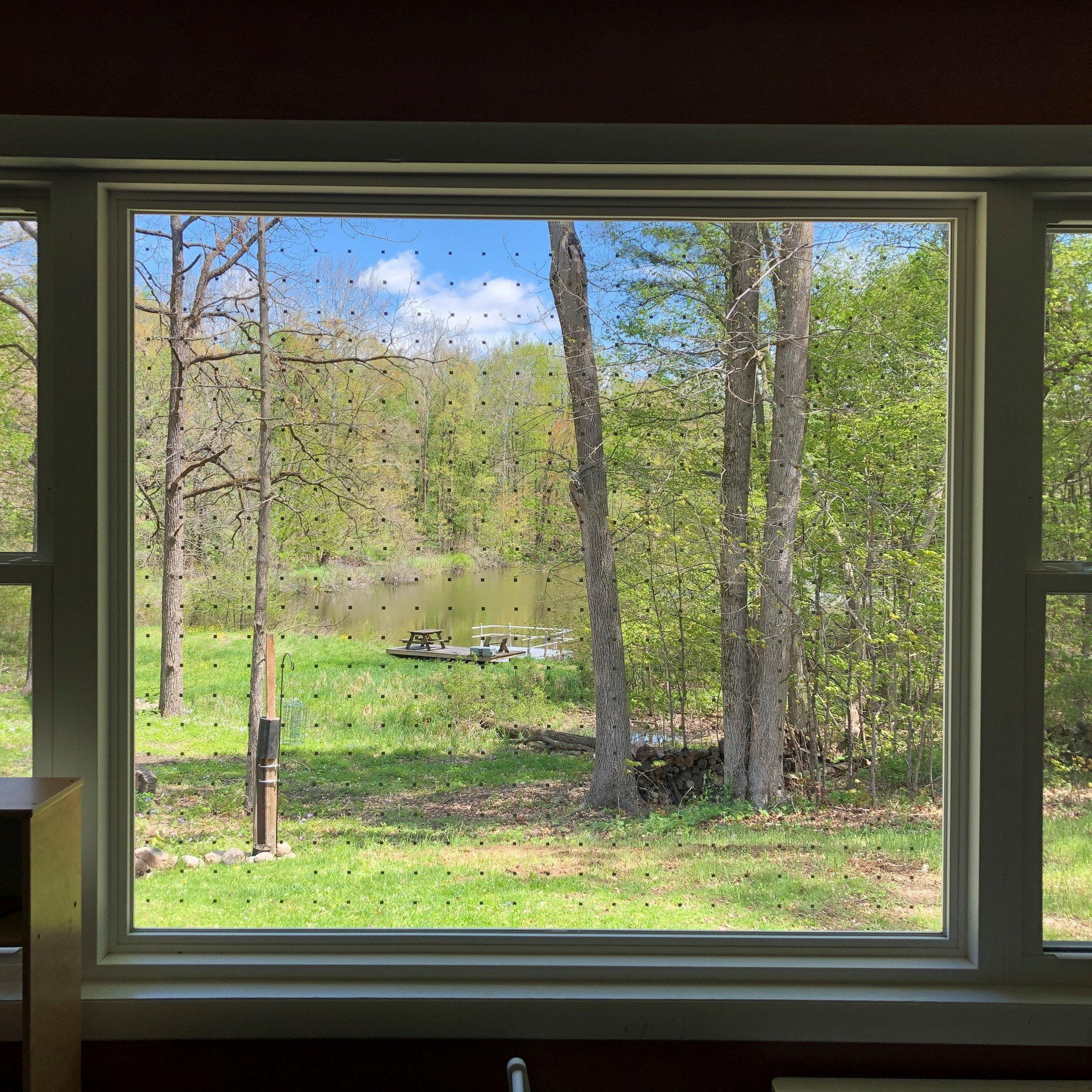 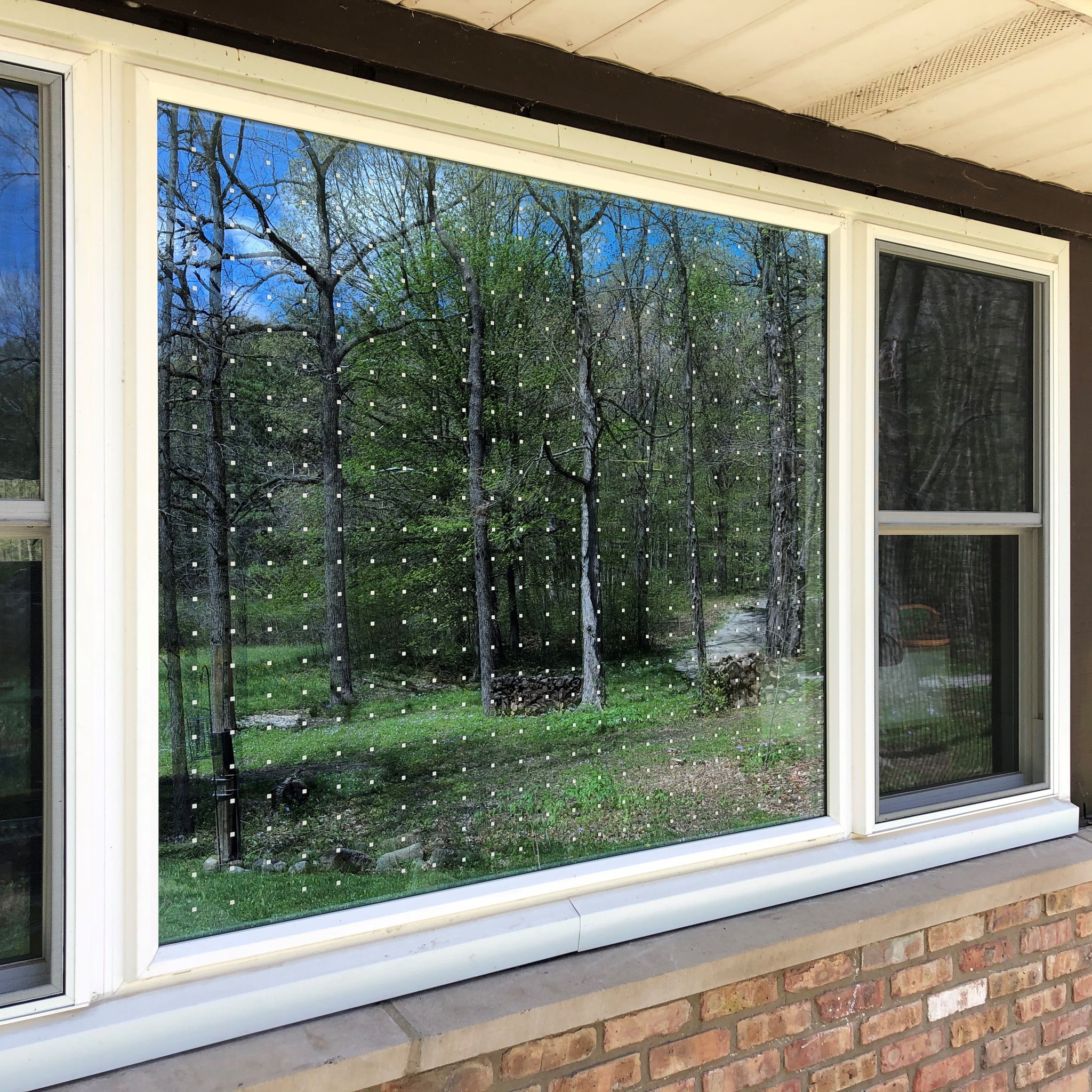 All of these applications are meant to go on the outside of your windows so depending on who you are you may need to ask someone handy to apply if you don't like climbing a ladder if that's necessary. Outside temps can affect application so be sure to check the packaging for directions.

The big thing to keep in mind, any of these have the thrill of potentially saving lives so it really is worth the investment whichever avenue you choose. Even those birds that hit that you manage to see fly off as though nothing has happened, in reality do fly off only to die elsewhere. It's really disheartening when you start to learn the stats behind window strikes.

NEW: Now also in black (and not just the original pearl colour) for application to glass panel fencing on decks or on places like clear basketball backboards. The black colour makes it more easily seen for the birds on both sides of the glass.

In new builds you can have custom glass made for your window that has the dots built into them. You can go wild and crazy with this because the dots could be little letters, forming words, poems, quotes etc. A little artistic fun and saving birds all at the same time!